Bethesda is celebrating Halloween in Fallout 76 with an upcoming event called Mischief Night, the developer announced on Thursday. The festivities will begin on October 29 at 12 p.m. EDT and run through noon on November 5 and will run for a full week to give player a chance to embark on a themed adventure where you'll have to complete different Halloween-related tasks. Dubbed "Mischief Night," the developer calls the new seasonal event "a week of explosive fun" involving "tricks, treats, and a little costumed mayhem". Participate enough and you'll get experience, loot, and more rewards like costumes. 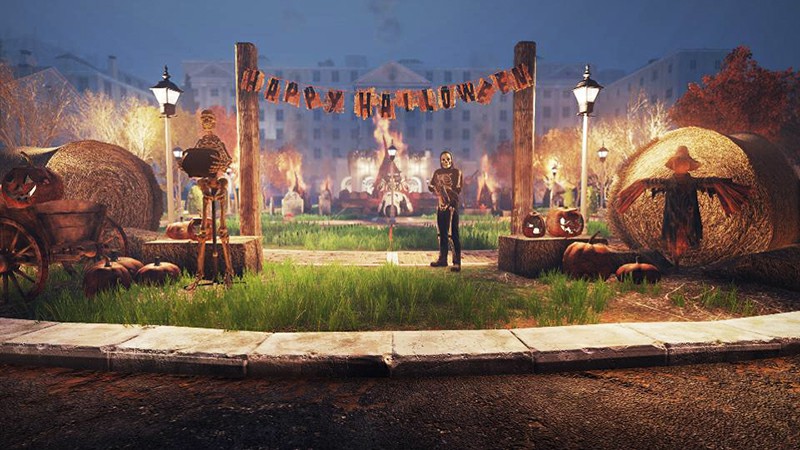 This Mischief Night is part of Fallout 76's ongoing series of Public Events that bring players together for scheduled challenged. This event is centered around an Eyebot named JES-2R who's bringing players together to blow up cars and perform other tasks.  It sounds like the public event centers on players causing explosions, defacing Whitespring property, and running from the community's mechanized security forces.

"Gather with other troublemakers at the Mischief Pyre near the Springhouse Gazebo for an explosive tour of the resort's park, cottages, and of course, its immaculate Courtyard," Bethesda said about its upcoming event. "Give the guards a fright along the way by blowing up cars, expressing your artistic side on walls, and forking the lawns, among other activities. You can even stop by candy bowls at the cottages to try your luck for a delightful treat, or a nasty trick."

Loot and other rewards were some of what was previewed as part of the event should you be able to fulfil all of JES-2R's requests.

"If you and your groupmates manage to meet JES-2R's mischief quotas, you'll get some XP and loot, including a chance for new themed items, like costumes, jack-o-lanterns, and more," Bethesda continued. "Wear your favorite costume to Mischief Night to earn double progress toward your objectives and unlock exclusive themed rewards. Costumes include ones that you've found or crafted in-game, ones that you've unlocked in the Atomic Shop, and even Fasnacht Masks." According to Bethesda, wearing a Halloween-appropriate costume or mask can also double your progress.

Players will be able to take part in this event as many times as they want since the Public Event will start up each hour, and you'll be able to fast-travel to it for free as well.