Apex Legends will change the rules of the game during the 13rd -27th August 2019 period. The Battle Royale game has always been a multiplayer game, but for a while you can try a limited-time solo mode. 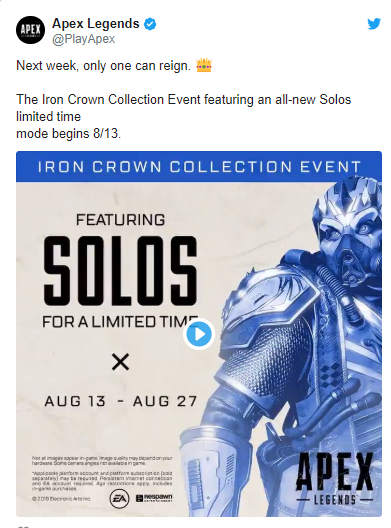 Apex Legends is getting a new event on 13 August 2019. It will bring the Iron Crown Collection game mode which will be time-limited and will not adhere to the three-man-team principles of Respawn's battle royale.

This is a major addition for a game that defined itself as squad-based from go. Since launch you've only been able to play in teams of three, emphasizing the complimentary and team-oriented abilities that defined many of the heroes.

Frechette said: "We will talk more about Solos on the spot, and you have the opportunity to play it." "Now we have to put it there to see what happens and what feedback we get."

It seems that in an event in August, the recent commitment was realized in the earnings conference call "one of the features that received the most fans' requests". The community at the time suspected it might be a solo mode. This season is coming soon, as Season 3 will be available sometime before the end of September. In the same earnings conference call, EA CEO Andrew Wilson said that the third quarter was "greater" than the second season.

We also look forward to seeing other Respawn things at the end of September. The studio plans to showcase VR games on Oculus Connect, scheduled for September 25th to 26th. Respawn has said that this is not its "advanced" Titanfall game, but that doesn't necessarily mean it won't be set in the Titanfall universe. It has successfully extended the universe with Apex Legends, so the studio may be planning to do it again.