Star Trek Beyond fans will have something to celebrate, as Star Trek Online launches the USS Franklin in its latest update.
From October 10th to October 31st, Star Trek Online is running a promotion that will provide an additional bonus when opening a Research and Development Pack. 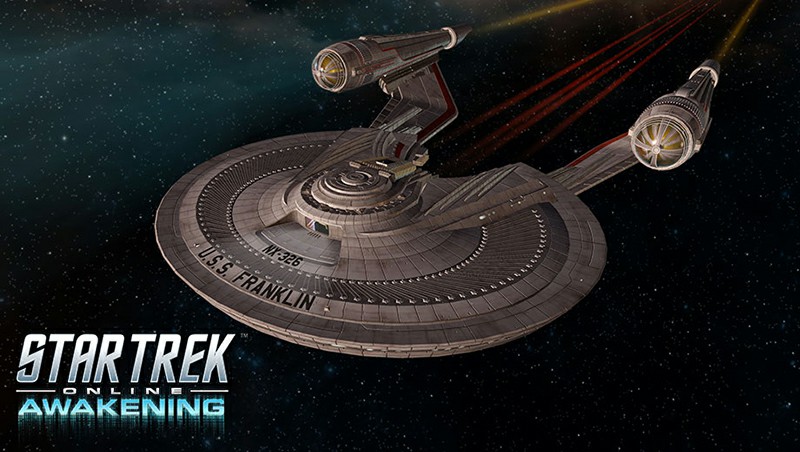 Additionally, details around the Freedom-class Exploration Frigate (T6) was shared.

In addition to this new starship, opening this Special Requisition Choice Pack - Tier 6 Promotional Ship Choice Pack will give the recipient a choice of any Tier 6 ship found in any previous Research & Development or Duty Officer Promotional Pack.

The player fortunate enough to win this ship pack will be presented with a choice of claiming a package containing this exciting new starship, or any one of the following ships:

The Special Requisition Pack - 23rd Century Tier 6 Ship opens into one of the ships below, depending on faction:

There are even more ships you could win, like:

You might also get the Special Requisition Pack – 26th Century Dreadnought Cruiser, which opens into one of the ships below, depending on faction:

Here is some information about the Research and Development Pack:

These packs feature a myriad of materials to give you a head start with our latest Crafting System update. With numerous Crafting Materials (ranging in rarity from Common to Very Rare), R&D Components galore, and a variety of R&D Catalysts, these packs offer tons of opportunities to start crafting with a bang!

The C-Store features both single packs and bundles of four, so Captains can buy multiple packs at a discount.

This pack includes:
4 Research and Development Packs
(You will receive 4 separate packs when making this one purchase, NOT 1 pack that unpacks 4)

The Freedom Class has a classic look, but renovations from the future have made it up to speed with anything in the modern era. It contains powerful communications arrays to overwhelm enemy computer systems, and an enhanced landing system should it ever need to take to ground.

The Freedom-class Exploration Frigate comes equipped with a VHF Disruptive Transmission. When activated, it will blast high frequency radio waves towards nearby foes, dealing significant electrical damage to them, especially smaller ones. Additionally, your ship’s maneuverability will increase significantly while this is active.

This console also provides a passive boost to Electrical Damage and Hull Capacity. It can be equipped in any console slot, on any ship. You may only equip one of these consoles.