During the all-new Mycelial Crisis event coming to Star Trek Online later this year, you will be able to unlock an all-new starship, the Elachi Qulash Frigate [T6]! Once completed, this starship will be unlocked for all characters on your account! More details on how to unlock this ship will be contained in a separate developer blog that covers the upcoming new event. 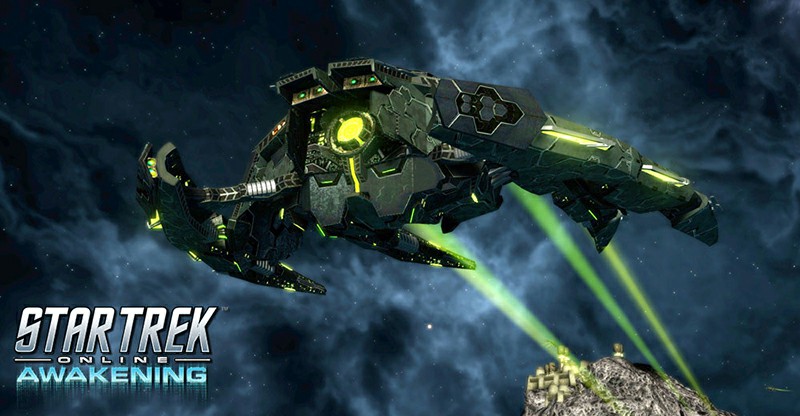 The Qulash Frigate is a fast, nimble starship used to great effect by the mysterious Elachi in their campaign of devastation. Its ability to nimbly maneuver into Mycelial Space and exit from it with heavy firepower to point at foes makes it quite a threat to be reckoned with on the battlefield. During conflicts with these silent enemies, much of their technology has been salvaged and repurposed for use in the fight against them and their mysterious allies.

Frigates are a unique combination of Cruiser capabilities, in a smaller, faster and more fragile package. They come with the Strategic Maneuvering and Weapon System Efficiency Cruiser Commands, and are able to benefit from Raider Flanking bonuses as well. These nimble vessels are also similar to a Raider in that they boast an abundance of universal bridge officer seats, can load dual cannons, and have similar weapon slot configurations.

When activated, your ship jumps into Mycelial Space via an Elachi Rift. While in Mycelial Space, you will move at an accelerated pace relative to normal space. After a few seconds, you emerge back into normal space, gaining bonus weapon damage to foes in your front arc for a short duration due to the surprise of your sudden movement and the distortions caused by the Elachi Rift.

This console also provides a passive boost to Starship Targeting Expertise and Starship Energy Plating. This Console can be equipped in any console slot. It may be equipped on any ship. You may only equip one of these consoles.

After achieving level 5 in the Elachi Qulash [T6], you will unlock Invasive Maneuvers Starship Trait. While this trait is slotted, your evasive maneuvers will be upgraded using Elachi technologies. When you activate it, you will perform an invasive scan on the nearby foes, disabling vulnerable bridge stations for a short duration, before phasing into Mycelial Space for a short duration.

NOTE: The above stats and systems are subject to change.