After "Magic Academy" went online, many players said that they really enjoyed the time spent with the instructors and students at Carano Academy, but they also felt that the campus life was missing some really interesting extracurricular activities. We hear you! In this new version, we will introduce the most popular club activity in the Academy, the all-new Carano Chess! Come and experience it for yourself. At the same time, with the new season, you can expect a whole new Ranked Match experience with our major updates, as well as system improvements in the match environment and matchup rules. Also, to improve the refresh experience of Middle Lane Mages, we'll make further tweaks to the battle mechanics and equipment system in this update. What's more, when we unveil the new "Light Chaser," we will also welcome the Light Chasers Team to come on board and share their stories in the world of Athanor. Come, let's get ready to follow them in their adventures! 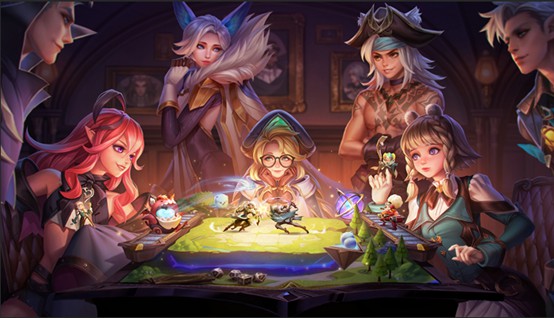 1. Overview
Carano Chess is a new casual match mode in Arena of Valor that pits players' strategies in the different rounds.
Carano Chess is an ancient game played among the mages. It became popular after D'Arcy, the legendary mage from Carano Academy, replaced the chess pieces with heroes of the day and modified the rules of the game.

You can invite friends to pit your chess skills against them, but not in the same camp. This is an individual game where players fight on their own.

3. How to Play
Rules
1) There are many rounds in Carano Chess. In each round, players challenge a random opponent or a target PVE stage.
2) As chess pieces, the heroes battle on the chessboard automatically until there is a winner or the time is up.
3) Points will be deducted from the loser accordingly. Ranking is done in real time and is based on the current score at the end of each round.
4) Player has to eliminate all other players to win. Rewards are handed out according to the ranking. The higher the ranking, the better the rewards.

How to Upgrade Your Combat Capability
Part 1: Hero Recruitment
Purchase your desired hero when the game starts officially. Drag your hero into the battlefield to form a sensible team lineup, and tweak the hero's position accordingly (make sure your rear is protected).

Part 2: Hero Upgrade
When you purchase three of the same hero (same star grading), you can combine them to form a hero with a higher star grading (up to 3 stars).

Part 3: Activate Combos
Every hero has two kinds of combos: Class and Camp. In a team, the combo effects are activated when there is a certain number of heroes with the same combos.

Part 4: Essence Upgrade
Upgrade the level of Essence, up to a maximum of level 9, to increase the number of units deployed in the lineup.

Part 5: Equipment
In the PvE round, monsters will drop equipment that can be used to equip the heroes, and this will improve their combat capabilities significantly.