Vainglory is a magical style multiplayer online competitive mobile game developed by American developer Super Evil Megacorp. The game tells that Hessian Well is an ancient source of energy. Players can play heroes such as Joule, Grace, and Rona to seize control of the ancient well.

In the world of Vainglory, it is half controlled by the power of magic and half by the power of technology. Among them, the Hessian Canyon is the longing for all heroes and the most important battleground in the world. Because the center of the canyon is where the well of Hessian is located. This ancient source of energy has amazing power. It provides energy for the tech world as well as the magic world. However, ancient Wells only occasionally release this energy. If you want to monopolize this energy, the heroes must fight to gain control of the ancient well. However, going it alone is too risky. So, some heroes find friends and family, some heroes choose to join gang, some heroes form temporary alliance. They are usually three people. They are in the valley. They are always ready to fight and compete with their rivals. 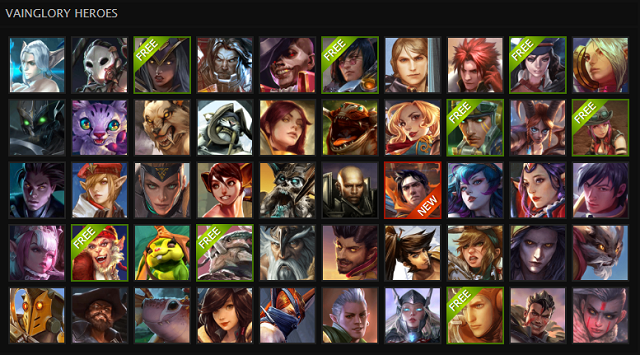 There are five different hero classes you can choose from, including Warrior, Mage, Sniper, Protector and Assassin. The classifications of each should be fairly familiar to you.  Some are catering to long distance engagements, while others are best utilized for close combat.

Mage is a long-range spell-attack hero. This type of hero has a very high output, but has low defense and is easy to die. They must have a sense of agility on foot and be sure to keep their distance from the enemy before they have a chance to launch a wide range of attacks.

Warriors are heroes of melee attacks. These heroes can fight in melee and can inflict a huge amount of damage on every enemy in battle. Warriors heroes are the best bet to play the wild, finding opportunities to kill vulnerable singles targets, or to unexpectedly get ahead of the pack and disrupt the enemy's position.

Assassin is a hero of melee physical attacks, and their agility and stealth skills make up for the fragile defense. They cut into the target formation, and when the opponent's output is interrupted, they can accidentally destroy the weaker opponent.

Sniper is a remote output class hero that can knock down enemies in the distance from the battlefield. When the enemy is too close, you can hide yourself. However, the shooter heroes are both low in life and defense. They need to be separated from the enemy to be the main damage exporter in the team. The shooter hero is more suitable for combat or fight against the line.

Protector is the team's damage bearer, helping teammates to escape or reverse the battle, providing strong support for the team. They can have certain auxiliary skills, such as healing, enhancing damage, stunning and defeating the enemy team, etc., and assisting heroes are more suitable for line operations.